Every time a cell divides the DNA that makes up the chromosomes is replicated. Every time the DNA is replicated there is the potential for mistakes to be made as there are billions of base pairs involved. The more often cells divide the higher the risk that a mutation will occur.

Throughout the cell cycle check points are on the lookout for errors in the DNA or the DNA replication process. But they don’t get it right all the time and sometimes cells containing errors in the DNA slip through the net. Even if a mistake happens and the cell continues into mitosis and cytokinesis, other mechanisms are in place for mopping up rogue cells. The immune system can recognise faulty cells and mark them so that phagocytes engulf and digest them. Cells also have their own self-digesting system known as apoptosis. In apoptosis mechanisms within the cell itself recognise faulty DNA and release the enzymes from the lysosomes, so the cell digests and destroys itself.

Mutations are changes in the genetic material. It is normal for random breaks to occur in DNA during mitosis and meiosis. They are usually repaired by maintenance enzymes. But sometimes the change is missed. Mutations may involve anything from a single base to a whole chromosome. Mutations can occur in the somatic (body) cells during mitosis or during meiosis when the gametes are formed. Many mutations have no effect on the organisms at all. Occasionally mutations result in a different protein being formed that gives the cell or organism an advantage in a particular environment. Sometimes mutations cause problems – these may be in the form of a change that causes a genetic disease or they may result in the uncontrolled cell growth we recognise as cancer.

All of these amazing adaptations are the result of mutations and natural selection.

Point mutations: The mutation of one or a small number of bases within a gene. Changes in the codons of the DNA can affect which amino acids are linked together to make proteins, and so can affect the whole cell.

Chromosomal mutations: Changes in the positions of the genes within a chromosome – the genes may be duplicated, deleted or their positions may be changed around.

All of these mutations have the potential to produce problems in the individual, because they may result in the formation of a different protein that does not function properly in the cell. 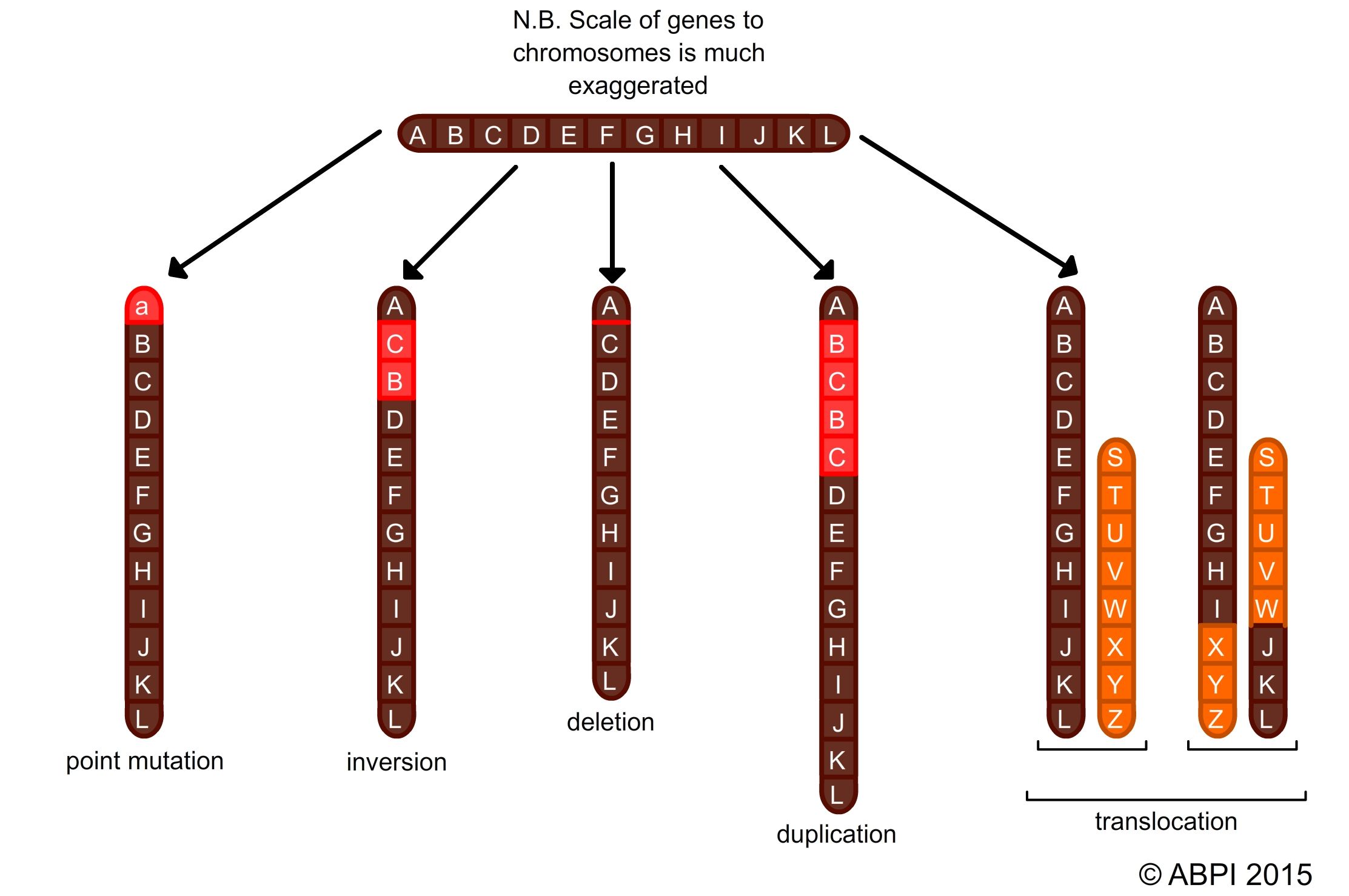 In multicellular organisms the cell cycle is repeated rapidly in almost all cells during growth and development. In mature organisms it may slow down or stop completely, in some tissues at least. The cell cycle is controlled by a number of chemical signals made in response to different genes. This control is brought about at a number of checkpoints as described on page 4

The transformation of a normal cell to a cancer cell usually involves a series of gene mutations. Mutations are irreversible and are passed on to the daughter cells during mitosis. Certain genes are involved in the maintenance of normal cell growth patterns. Mutations in these genes greatly increase the risk of cancer developing.

Oncogenes have the ability to transform normal cells into cancer cells, but only do so if something happens to switch them on. They are normally switched off but if a mutation switches them on they become the ‘accelerator’ genes of cancer.

Suppressor genes act as ‘brakes’ as they normally control or prevent cell division. Mutations in suppressor genes can result in cells dividing uncontrollably. For example most human tumour cells have a defective p53 gene – one of the most important tumour suppressor genes.

Caretaker genes help keep DNA in a good state of repair, and in so doing prevent the build-up of DNA damage which can accelerate the formation of cancer. Mutations in these genes prevents the repair of potentially cancer-causing mutations in other genes

If cell division is uncontrolled the cells tend to be smaller and undifferentiated. They form a tumour, a mass of undifferentiated cells. Some tumours are malignant or cancerous. Malignant tumours grow and spread into the healthy tissue around them. Some of the cells may detach and be carried around the body in the blood or lymph tissue until they lodge in another organ. There they begin to grow and invade the healthy tissues, forming secondary cancers. This is known as metastasis. Non-malignant tumours are less dangerous than cancers, but they can still cause disease and death depending on where they are growing. 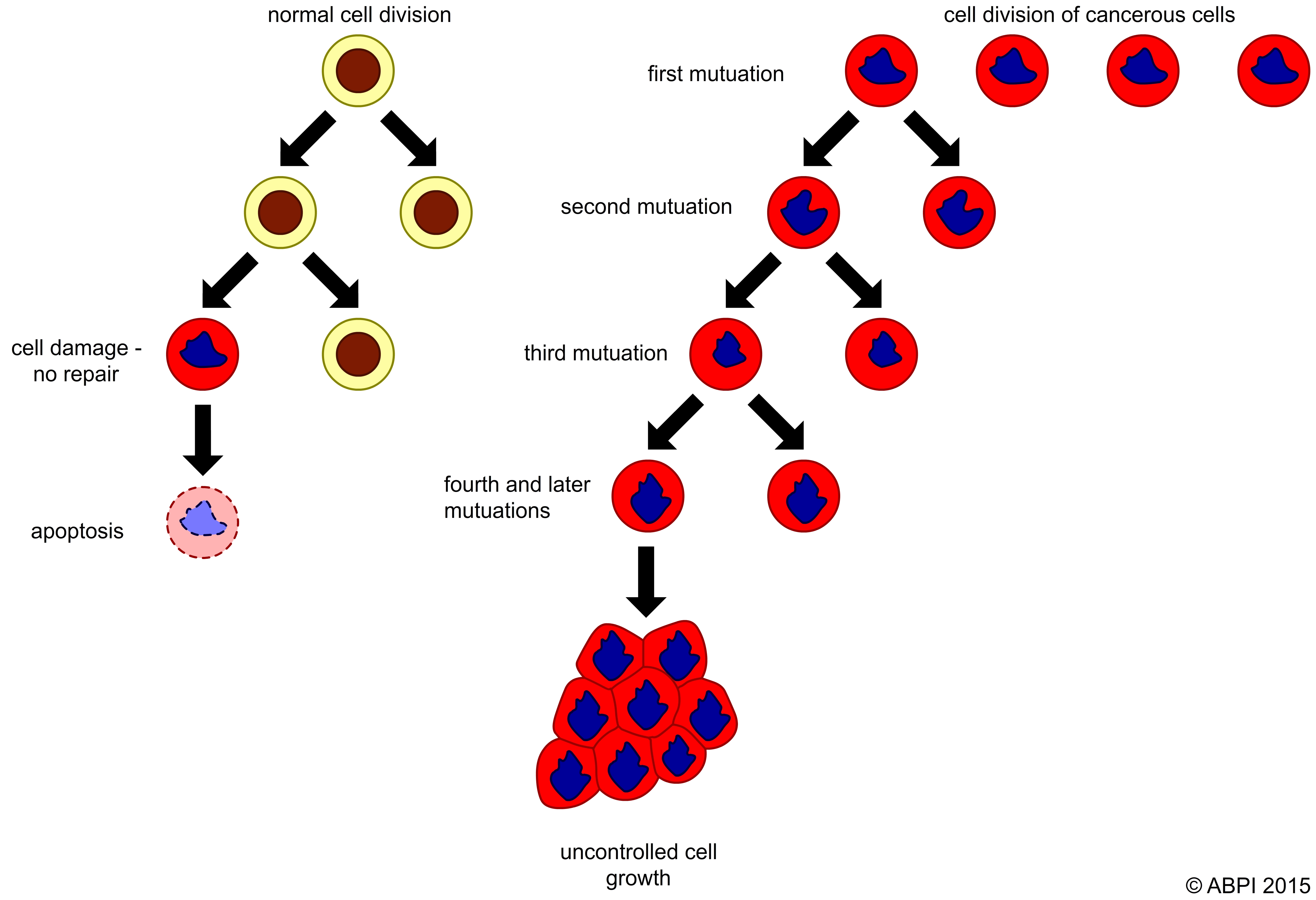 Normal cell division and the development of cancer