What is One Health?

The health and wellbeing of people, animals, and the planet are interconnected, meaning that they depend on and react to each other. One Health is an idea which aims to increase collaboration between professionals who protect the health of humans, animals, and the environment. By working together, we gain expertise and knowledge which will help us to react to future challenges.

EMERGING INFECTIOUS DISEASES: Infections that have recently appeared in a population or which are spreading rapidly outside their range.

ANTIMICROBIAL RESISTANCE: Antimicrobial resistance is defined as the ability of a micro-organism to grow or survive in the presence of an antimicrobial at a concentration that is usually sufficient to inhibit or kill micro-organisms of the same species.

ZOONOSES: Diseases that can spread between animals and humans.

‘Emerging infectious diseases’ and ‘antimicrobial resistance’ are two important, global issues. Since they are connected to human health, animal health, and the environment, these topics benefit from the collaborative approach of the One Health initiative.

Over the last three decades, nearly 75 percent of all emerging human infectious diseases originated in animals1. To prevent zoonoses (diseases that can spread between animals and humans e.g. influenza or “flu”, and rabies) and control antimicrobial resistance, it is important that information is shared between professionals in a range of sectors (public health, animal health, plant health, the environment), as one sector alone cannot eliminate or handle the global challenges without interaction with the other sectors involved. 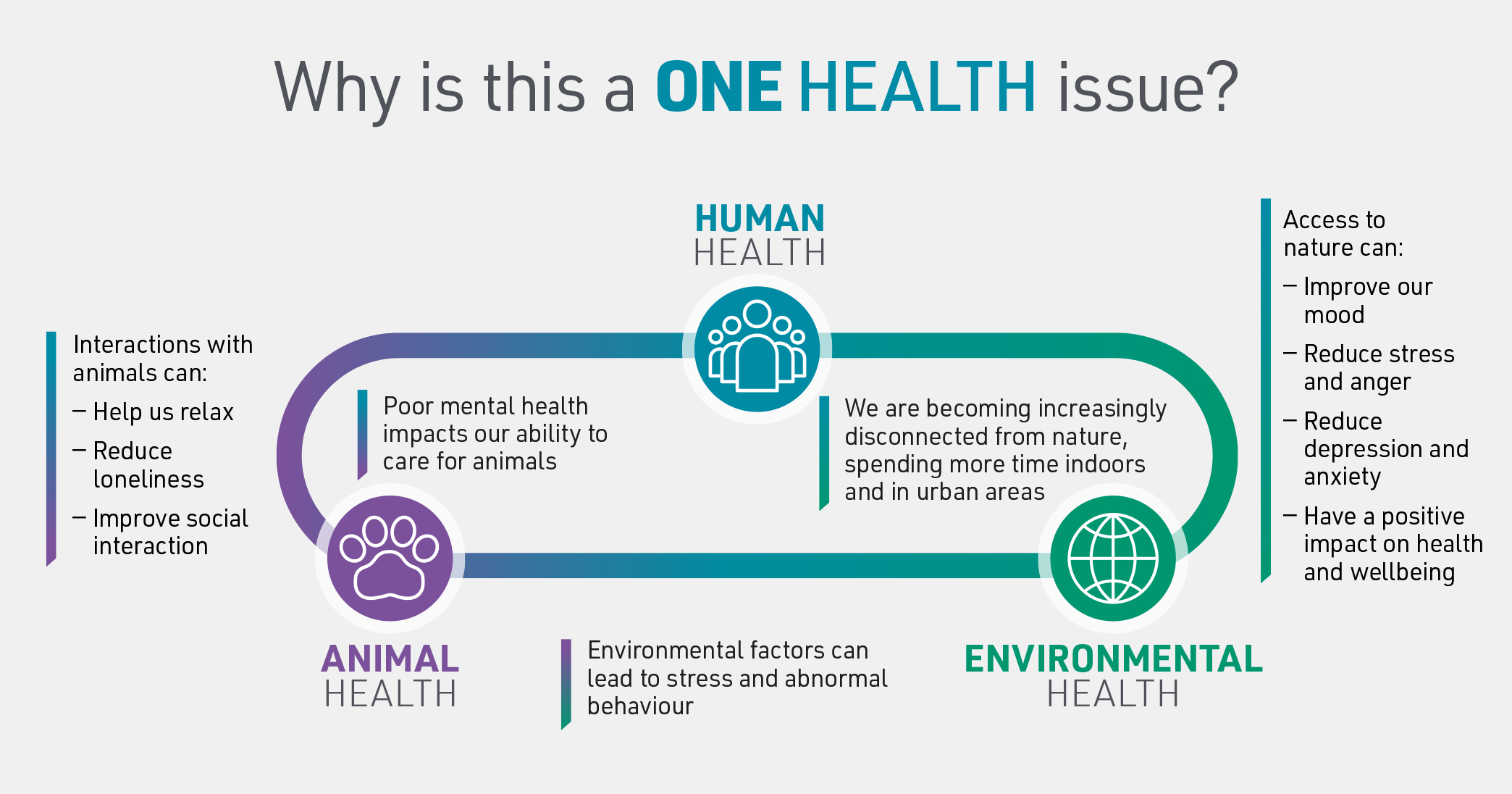 Why antimicrobial resistance is a One Health issue. Source: BVA<sup>2</sup>

VACCINES/VACCINATION: Vaccines are important in protecting humans and animals from disease. A vaccine contains a weakened or dead form of a pathogen, its toxins or surface proteins. The immune system reacts to the vaccine as if it contained a functioning, disease-causing microorganism. The immune system is ‘trained’ to fight off the disease so that if the person or animal encounters it in future, an infection can be prevented.

The risk of infection by zoonoses grows as our population increases, and people live in ever closer contact with animals. To prevent these types of infections, the veterinary surgeons who provide animal healthcare services to people who look after companion animals (e.g. dogs and cats), as well as farm animals (e.g. pigs and cows), can use vaccinations and other medicines as appropriate to help prevent zoonotic diseases. Vaccination has long been an effective way to reduce disease burden in pets and farm animals, and is a key tool in maintaining animal health and welfare. Vaccines play an increasingly vital role in preventative health and disease control programmes in animals. Other measures, such as appropriate hygiene precautions being taken by farmers and pet owners also plays an essential role in reducing spread of zoonotic disease.

Animals can be vaccinated to prevent the spread of infectious diseases such as rabies where the use of vaccines protects both human and animal health; the animal is protected from the disease by the use of the vaccine, while humans are protected because if they encounter the animal (e.g. a dog) if the dog is protected against rabies then human health is also protected as the dog will not become infected and subsequently infect the person.

Farmers have a responsibility towards the animals in their care, and just as with humans, vaccines are used to keep these animals in good health and antimicrobials are used to treat bacterial infections should they become sick.

The use of all medicines, including antimicrobials, in animals is controlled and regulated in the UK by the Veterinary Medicines Directorate (VMD). This is a government organisation that ensures: only authorised medicines are prescribed, that they are being used correctly, and that food of animal origin is safe for people to eat.

Before a veterinary medicine can be marketed and sold to vets and animal owners, the independent regulatory authorities carry out an assessment of the product under 3 key headings - safety, quality, and efficacy. Stringent safety criteria are imposed during the evaluation of the medicine. Safety aspects of a medicine include its safety in animals; in those individuals administering the veterinary medicine e.g. farmers, pet owners, vets; and safety in the environment. In the case of farm animals, the safety assessment also means it will be safe for consumers to eat animal products e.g. meat, milk, eggs, or honey from treated animals.

For farm animal medicines there has to be a Maximum Residue Limit (MRL) for the active ingredient (the highest level of residue that does not pose a risk to the consumer) and set withdrawal periods – the time that must elapse since the last treatment before the animal or its products can enter the food chain, which ensures any remaining residues are below the MRL. Large additional safety factors are also applied during the establishment of the withdrawal period to ensure consumer safety.

The independent regulatory authorities also oversee a programme that checks and monitors the levels of veterinary medicines residues in foodstuffs. The MRL is the maximum concentration of residue accepted by the European Union (EU) in a food product (e.g. meat, milk, eggs) obtained from an animal that has received a veterinary medicine 2.

In the process of establishing an MRL, firstly a No Observed (Adverse) Effect Level (NO(A)EL) is identified through scientific studies with the active substance. The NO(A)EL is the highest dose that does not cause adverse effects. This figure is then divided by an ‘uncertainty’ or ‘safety factor’ e.g. by 100-1000 to determine the Acceptable Daily Intake (ADI). The ADI is the amount of the residue that is considered safe for an individual to eat every day for their lifetime considering several safety factors. The MRLs are such that consumers can ingest generous amounts of animal foodstuffs every day without exceeding the ADI. Several factors are taken into consideration here including the amounts of each food eaten per day and how the substance is metabolised and distributed in the various tissues. An MRL is then set for each edible tissue and product to ensure the ADI is not exceeded. 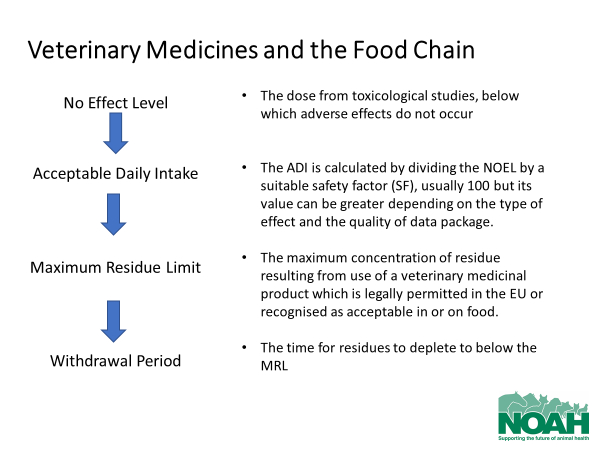 The withdrawal period is a specific set period, after the last dose of the veterinary medicine has been administered, that must elapse before an animal or foodstuffs from an animal can enter the food chain. To determine the withdrawal period, regulatory authorities must employ a scientific process that includes establishing the Maximum Residue Limit (MRL) for that medicine.

Veterinary medicines residues are molecules (e.g. fragments or remnants of a medicine used to treat an infection) that remain in meat or animal products after the animal has been treated and its produce subsequently enters the food chain. The level of veterinary medicines residues in foodstuffs are monitored and checked on an ongoing basis. These monitoring programmes ensure that residues do not pose a risk to human health via the food chain. At all times, the farmer must by law observe the ‘withdrawal period’ as referred to above, whereby the animal or any of its products is prevented from entering the food chain for a certain period of time after a medicine is given.

A key message that responsible use initiatives give to vets and farmers is that Antimicrobials should be used in animals ‘as little as possible, but as much as necessary’ to strike a balance between protecting animal health and controlling antimicrobial resistance3. It must not be forgotten that it is a legal requirement for animal owners to ensure that their animals (whether farmed or pets) receive proper veterinary treatment if they are sick. Veterinary medicinal products including veterinary authorised antibiotics play an essential role in maintaining animal health and welfare and ensuring the societal need to look after animal’s welfare needs are met.

The spread of antimicrobial resistance

Infected animals that are treated with antimicrobials have the potential to lead to resistant microorganisms in the environment if proper practices are not followed by the farmer or pet owner. Examples of failure to follow proper practices include not finishing the course of antibiotics or using medicines not prescribed by a vet.

As a result of this interconnectedness between animal diseases and human health, emerging infectious diseases and the spread of antimicrobial resistance is a One Health issue, and will be tackled best by connecting across different professions including vets, farmers, doctors and the food retail sector.