Advances in biotechnology such as the polymerase chain reaction and DNA sequencing are making it possible for scientists and doctors to make huge strides in treating diseases. However, they have also had an amazing impact on the ability of the police to both identify criminals and to prove that people are innocent of crimes. The first ever murder conviction which was brought about as a result of DNA evidence also cleared a man of rape and murder using the same techniques. It is an incredible story...

In 1983, 15-year-old Lynda Mann was raped and murdered in Narborough in Leicestershire. A semen sample was taken from her body but at that point scientists could only tell the blood group and certain enzyme types from the evidence. Three years later another 15-year-old girl, Dawn Ashworth was also found raped and murdered in the same area. All the evidence pointed to it being the work of the same man. The semen samples showed that the blood groups matched. 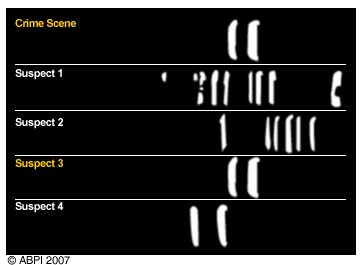 An example of DNA fingerprinting

The police had a suspect – a local man who eventually confessed to Dawn’s murder but denied having anything to do with Lynda’s death. The policemen in charge of the case – Chief Constable Michael Hirst and Chief Superintendent David Baker were convinced that if he had committed one crime, he had committed both. They contacted Dr Alec Jeffreys and his team at Leicester University. They had published work showing how new DNA analysis techniques – what we now call DNA fingerprinting – could be used to help solve crimes. When Alec Jeffreys ran a comparison between the semen from both rapes, and the blood of the suspect, he found that the crimes had certainly been carried out by the same man – but it wasn’t the man who had confessed!

David Baker then decided to set up a mass screening of all the adult males in the three villages in the area where the girls had lived and died. 5000 men gave samples, and DNA profiling was carried out on the 10% of the sample who had the same blood group as the murderer. The process in those early days was long and slow, and people in the Forensic Science Service worked long and hard, putting in evenings and weekends, to deal with all the DNA and track down the killer. But no one matched the DNA from the killer – what else could be done?

Even with the DNA evidence, the killer might have got away with it and lived to kill another day if it hadn’t been for an overheard conversation. A local woman heard a colleague boasting to someone that he had given his DNA sample in a false name – he had done a mate a favour and claimed to be Colin Pitchfork when he gave his saliva sample. The woman went to the police, the real Colin Pitchfork was arrested and DNA samples were taken. Sure enough, when the results came back, Pitchfork’s DNA profile matched that of the semen taken from the murdered girls. The police – with the help of some very new biotechnology – had got the killer and in 1988 Colin Pitchfork was jailed for life for taking the lives of two young girls.

Should there be a national or international DNA database of all our DNA profiles to help police identify criminals from the clues – blood, skin, saliva, semen, faeces – that they leave behind at almost every crime scene? Visit our DNA on trial activity which will help you to think through all the pros and cons of this idea.

The UK National DNA database holds the DNA profiles and DNA samples from select individuals in the UK. Many people are against the idea of extending this database because of the potential threat to privacy. These samples can reveal ethnicity and information on the individual’s health.

What do you think, should the DNA database be extended?

Have a look at the links below for more information:
Is it ethical to have a national DNA database? Your Genome
Pros and cons of a compulsory DNA database, the Week

Gene therapy – hope for the future?