To be able to use a medicine effectively we need to be able to diagnose diseases quickly and accurately.

There is an ever increasing choice of different drugs to treat diseases, so it becomes even more important to get our diagnoses right. Many of our diagnostic techniques involve high levels of technology - X-rays, MRI scans, PET scans, CAT scans, ultrasound scans, electrocardiograms, electroencephalograms - and we will not be considering those here.

Others involve a combination of chemistry, biochemistry and biology. 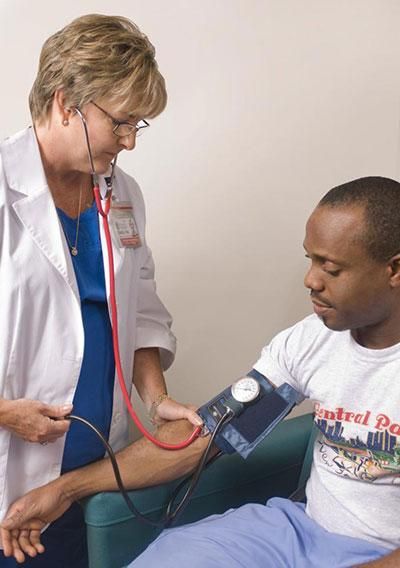 The importance of a GP listening to their patients and examining them to make a diagnosis cannot be underestimated. But specialised diagnostic tests help doctors diagnose more diseases, with more certainty, so they can be treated appropriately.
(Photo credit: Amanda Mills, CDC) 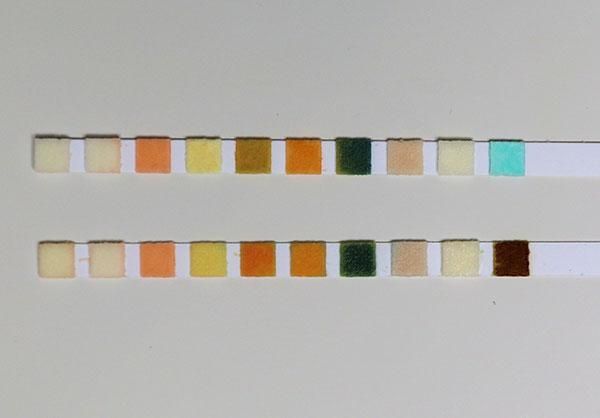 Simple dipsticks used with the urine can help in the diagnosis of many different diseases.
(Photo credit: Iqbal Osman)

There are many common conditions that result in a change in the composition of the urine. Carrying out relatively simple chemical tests can show if the urine contains glucose (a common symptom of diabetes mellitus), ketones that are produced when the glucose metabolism is not working in diabetes or when someone is starving, proteins that might result from high blood pressure, bilirubin that is an early indicator of liver disease and many more.

Many of the diagnostic tests we use involve the use of monoclonal antibodies. Monoclonal antibodies are antibodies that are produced from a single clone of cells that has been produced to respond to particular cells or chemicals in the body. Monoclonal antibodies are used in a wide range of diagnostic tests, from identifying specific pathogens in communicable diseases to identifying markers produced by cancer cells and diagnosing pregnancy. They are used to produce ELISAs - enzyme-linked immunosorbent assays - where binding to the antibody is linked to a colour change that is easy for scientists and clinicians to identify.

A mouse is injected with hCG (human chorionic gonadotropin) so it makes the appropriate antibody. The B-cells that make the required antibody are then removed from the spleen of the mouse and fused with a myeloma, a type of cancer cell which divides very rapidly. This new fused cell is known as a hybridoma. Each hybridoma reproduces rapidly, resulting in a clone of millions of 'living factories' making the desired antibody. These monoclonal antibodies are collected, purified and used in a variety of ways.

Blood tests are also widely used as part of the diagnostic process. Examples include:

If someone is having a heart attack, an ECG (electrocardiogram) will often be used to give an immediate diagnosis. Doctors also check for the levels of the enzyme creatine kinase and the proteins troponin I and troponin T - all of these are released from the damaged heart cells during a heart attack and so levels rise in the body. They can be used to confirm a diagnosis - for example if the patient has had a heart attack before admission to hospital.

The levels of mineral ions such as sodium, potassium, calcium and chloride ions are vital for the functioning of cells and systems in the body. An imbalance in these electrolytes can not only have physical effects such as triggering a cardiac arrhythmia, but can also change behaviour and affect your mental state as well. Some diseases affect the electrolyte balance of the body - but imbalances can also be caused as a side effect of certain drugs - for example the diuretics used to help control blood pressure in some patients. Electrolyte balance is measured using an ion sensitive electrode in a process called potentiometry.

The Longitude prize - testing for the future

It is estimated that the development of antibiotics has added an average of 20 years to our life expectancy in the UK but antibiotic resistance could undermine those gains. There is a real threat that common infections will once more become untreatable and in some cases fatal.

In 1714 the original Longitude prize was set up to solve the biggest scientific challenge of the time - the ability to navigate across oceans using longitude. It was solved by the development of a clock that enabled sailors to work out their exact position when they were at sea.

In 2014, 300 years later, the second Longitude Prize was set up. The challenge this time is to develop a rapid, easy to use test for bacterial infections that is both accurate and cost effective. This would enable health professionals not only to identify whether an infection is bacterial or viral, but to identify the type of bacteria and so prescribe exactly the right antibiotic to be most effective. This has two benefits - doctors would not prescribe antibiotics for viral infections, and they would be able to prescribe the most appropriate antibiotic every time. This would minimise opportunities for pathogens to develop antimicrobial resistance, and would maximise the usefulness of both current antibiotics and new ones that will be developed in the future. The Longitude Prize is a £10m prize fund, with an £8m payout, that will reward a team of innovators who develop a point–of–care diagnostic test that will conserve antibiotics for future generations. The test must be accurate, rapid, affordable and easy to use anywhere in the world.

The deadline to submit an entry to win the £8 million prize is 30 September 2022.