Embryonic stem cells and induced pluripotent stem cells (iPSCs) share many advantages. They are both easy to grow in a lab, can divide and produce new copies of themselves indefinitely, and are pluripotent. But iPSCs are believed by many to hold an ethical advantage: their generation doesn’t involve the destruction of an embryo.

iPSCs are ordinary cells from the body – usually easily extracted skin or blood cells – which have been ‘reprogrammed’ to become pluripotent by forcing them to express genes previously ‘switched off’ during differentiation.

iPSCs hold another advantage over embryonic stem cells: they can be produced from a patient’s own skin or blood and used to make specialised cells which genetically match the patient and won’t result in an immune response. This also means that stem cells can be generated from a patient with a specific genetic disease, so the development of the disease can be studied in depth and new drugs tested. 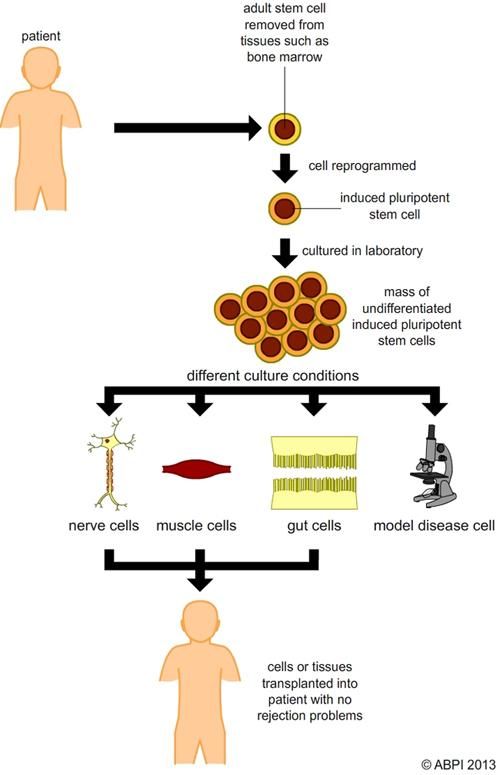 The principles of producing iPSCs and how they may be used to help patients.

Reprogramming initially involved introducing extra genes into the cell using viruses. Unfortunately, this method increased the risk of the cells becoming cancerous, as the genetic material of the cell was disrupted. More recently, specific proteins have been shown to cause reprogramming when supplied to the cell – as the genetic make-up of the cell is not altered there is a reduced risk of the cells becoming cancerous. New gene editing techniques such as CRISPR-Cas9 also mean it will be easier in future to make very precise changes to damaged DNA in the cells, removing it and/or adding a healthy gene to replace it. These new techniques should reduce future problems with tumour formation as a result of genetic modification.

As an alternative to direct genetic modification of the cells, scientists have also developed ways to introduce specialised mRNA into the cells to be reprogrammed. This resulted in the formation of reprogramming proteins, which in turn meant the cells were returned to a pluripotent state.

As the development of an iPSC culture involves either changing the genetic material of a cell or the genetic material it uses, it raises some of the same ethical issues as genetic engineering. Even though the creation of iPSCs does not involve the destruction of an embryo, some people believe their use is as morally dubious as embryonic stem cells because an iPSC could potentially become a human being and so should be afforded full human rights.

The full potential of iPSCs is not yet fully understood, and the techniques used to produce them have not yet been perfected.

Researchers need to make sure they have a complete understanding of the reprogramming process, how iPSCs and ESCs compare, and how the differentiation of iPSCs can be controlled when they are planning to use them in a clinical setting. Until these issues are resolved, iPSCs can’t be used as a direct replacement for ESCs, although their potential use is possibly more wide-ranging. However, they have been used in some clinical trials. The first time was in Japan, where iPSCs were used by scientists working on restoring the retinal cells in patients affected with wet age-related macular degeneration. The trial started with autologous cells, originating from the patient. It was halted for safety reasons and then restarted using allogenic iPSCs from a cell line developed at Kyoto University. There is still a long way to go with these potential treatments but they could certainly change the face of medicine for ever.