The brain after strokes

A stroke, like a heart attack, is usually caused by a blood vessel blockage, depriving an area of the brain of blood. The brain damage sustained can be debilitating and so the opportunity to decrease the effects of a stroke is medically important.

A study has been carried out that shows when human stem cells are transplanted into the brains of rodents which have suffered a stroke. The stem cells migrated to the damaged area of the brain where they reduced inflammation. These studies in animal models have been so encouraging that the same treatment is being attempted in humans. Stroke patients who have received stem cell therapy in ground-breaking clinical trials have shown some improvements, but it will be some years before the full value of this treatment is clear.

This image shows working brain cells developed from embryonic stem cells. They were persuaded to become immature nerve cells and then transplanted into the brains of young mice. This method could lead to treatments for many different brain conditions.

The brain and Parkinson’s disease

People with Parkinson’s disease show problems with movement, such as shaking, rigidity, and difficulty walking; they may go on to develop problems with thinking, such as dementia. Parkinson’s is caused by the death of dopamine-producing cells in the brain – dopamine is a chemical used as a signal in the areas of the brain that control movement. As it is not yet known what causes the death of dopamine-producing cells, conventional treatments rely on supplying dopamine to the brain (one popular medicine contains a chemical that is converted to dopamine in the body). This can only temporarily alleviate some of the symptoms of the disease because the nerve cells in the brain continue to be damaged.

Using stem cells offers not only the prospect of treating the disease by replacing the damaged cells, but also of studying it. Both ESCs and iPSCs have been differentiated in the lab to give dopamine-producing nerve cells; iPS-derived dopamine-producing cells have also been transplanted into the brains of rats, where they improved the symptoms of Parkinson’s. iPSCs from patients suffering from Parkinson’s have been differentiated in the lab to produce diseased nerve cells where scientists can study them in further detail. There are a number of trials in place at the moment looking further into the potential of stem cells as a safe and effective treatment for Parkinson’s disease.

Stem cells can offer prospects for treatment not only for damaged nerve cells in the brain but also in other areas of the body. There is currently no effective treatment for injury to the spinal cord, which can cause paralysis. When the spinal cord is injured, the initial damage to nerve cells is followed by a series of events that result in further damage to cells in the area surrounding the injury. The body cannot repair this damage, and so the injury is permanent.

Stem cell transplantation could be able to replace not only the cells that have died as a direct result of the injury, but also create new supporting cells that will stimulate new growth and reduce inflammation. Scientists have shown that paralysed mice which have been injected with embryonic stem cells have recovered some use of their hind legs.

Other scientists are looking at different aspects of the problem. People who suffer spinal injuries often suffer pain and itchiness, and may lose control of their bladder function. This is the result of a lack of an inhibitory neurotransmitter (GABA) which can no longer reach the spinal nerves below the injury site. Working in mice, scientists have grown GABA-producing cells from ESCs and implanted them into mice with damaged spinal cords. Six months later, the mice had much better bladder control, along with much less behaviour associated with pain and itching. There are several trials in the pipeline to test various aspects of spinal cord therapy in humans – so look out for interesting news stories in the future!

Every time you blink, the cornea (a clear tissue covering the front of the eye) is slightly scratched and damaged. If this damage wasn’t repaired, it would soon affect your vision. In most people, a group of stem cells in the cornea, known as limbal stem cells, help repair this damage by making new corneal cells to replace the damaged ones. Injury and disease can destroy this group of stem cells so the cornea cannot be repaired, leading to significant loss of vision.

If a patient has one healthy eye, their own limbal stem cells can be removed, cultured in the laboratory to increase the numbers and then replaced in the damaged eye. This has a high rate of success in restoring normal corneal cells and vision.

People often have the same problems in both of their eyes – and limbal stem cells from donor eyes do not seem to work so well. Scientists are researching the possibility of stem cells obtained by different means – ESCs and iPSCs – to make new limbal cells in the lab. This would mean donors would not have to undergo complex surgery to remove the limbal cells from their healthy eye, there would be a large supply of limbal cells for anyone who needs them, and hopefully they would also be able to eliminate an unwanted immune response. 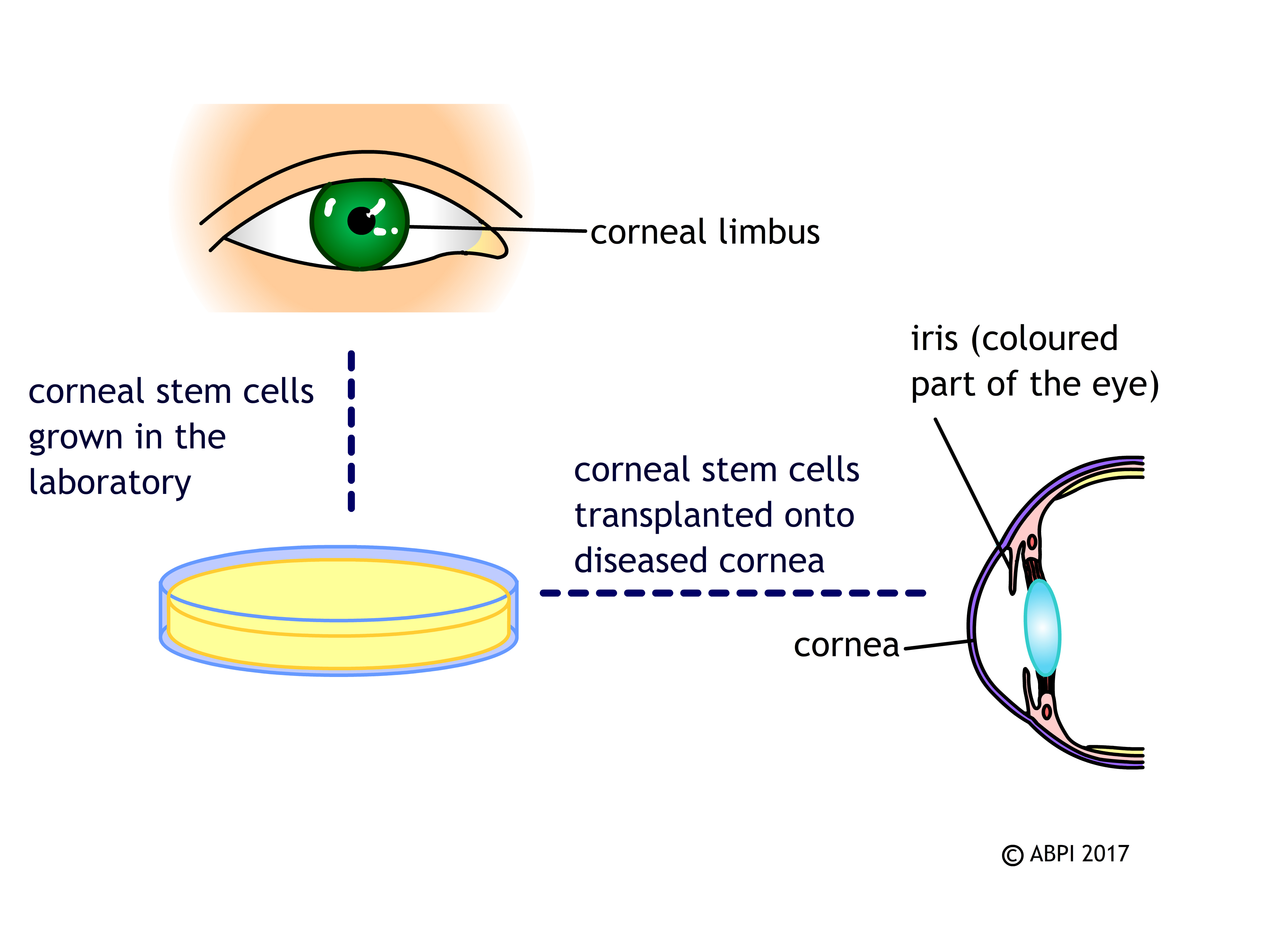 Using stem cells to repair damaged corneas is the only stem-cell therapy currently in regular use in eye therapies.

The cornea isn’t the only area of the eye that could benefit from stem cell therapy to repair damage: current research suggests that some vision problems resulting from degradation of the retina (the area at the back of the eye which detects light) can be improved with stem cell transplants.

Age-related macular degeneration is just one type of retinal degradation. It is a problem that generally affects the centre of the retina (the macula) of older people, leading to blurriness and a ‘black spot’ in the centre of their vision. This disease can stop a single layer of cells behind the retina (retinal pigment epithelial or RPE cells) from providing the support they usually do to the retina, meaning the photoreceptor cells of the retina die. Patients in the early stages of the disease (who still have a working retina) can be treated by receiving a transplant of healthy RPE cells. As it is not possible to extract healthy RPE cells from donors, researchers are investigating the possibility of transplanting embryonic stem and iPS-derived RPE cells. 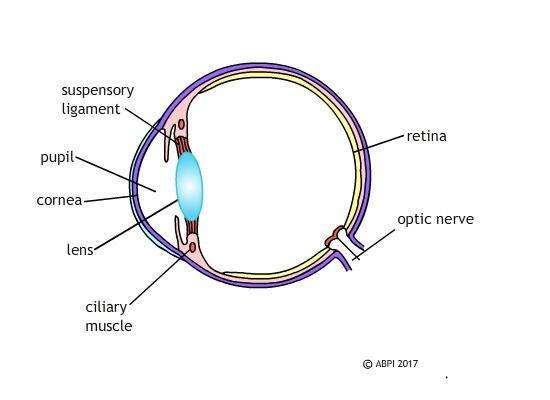 Scientists are investigating the use of stem cells to repair damage in the vital structures of the eye.

Once the cells of the retina die and sight is lost, replacing damaged RPE cells won’t restore the retina itself or sight – but replacing the damaged photoreceptor cells of the retina can restore vision. Several studies show that ESCs and iPSCs can be differentiated in the lab to form photoreceptors and photoreceptor-precursors. Embryonic stem cell derived photoreceptor precursors have even been transplanted into mice retina where they integrated well with cells already present. Some small studies have already tested this in humans: in 2014 a small trial on 18 patients treated with embryonic stem cells showed the patients had improvements in vision and the technique appeared safe. In 2017 researchers showed iPSCs could be used to at least partly restore sight in blind mice, producing light sensitive cells with neurological connections in the retina. Scientists are becoming increasingly excited as it seems that stem cells really will enable us to prevent or reverse a number of different forms of blindness in the future. This work, however, still has a long way to go before it can be used to routinely treat humans.

As we get older, the lenses of our eyes may become cloudy due to the build-up of protein clumps. Light cannot pass through a cloudy lens and we become blind as a result of these cataracts. In older people, the cloudy lens is often removed and replaced with a clear plastic lens. Some babies are born with cataracts, and unless the clouded lenses are removed surgically the baby will never learn to see. In 2017, scientists reported that they had successfully restored vision in 12 babies, removing the clouded lenses and moving some of their own lens epithelial stem cells into the lens capsule. Within 3 months all of the babies had grown clear, curved lenses which functioned well. Now scientists are considering ways in which they might be able to modify this treatment to help the millions of people who go blind globally as a result of cataracts.