Therapeutic cloning to create stem cells involves two different technologies: that of embryonic stem cells and that of cloning (or somatic cell nuclear transfer, SCNT). The nucleus of an egg cell is removed and replaced with the nucleus of a somatic cell, meaning the egg has the same amount of genetic material as if it were fertilised. An artificial stimulus – usually a tiny electric shock - is supplied to the egg which prompts it to divide in the same way as an embryo. This is a cloned human embryo, genetically identical to the person who donated the original cell. Once it reaches the blastocyst stage stem cells from it are harvested in the same way as from a normal embryo used for research purposes. This destroys the embryo so it cannot develop into a cloned human being – and any work towards developing a cloned human being is illegal in most countries of the world. 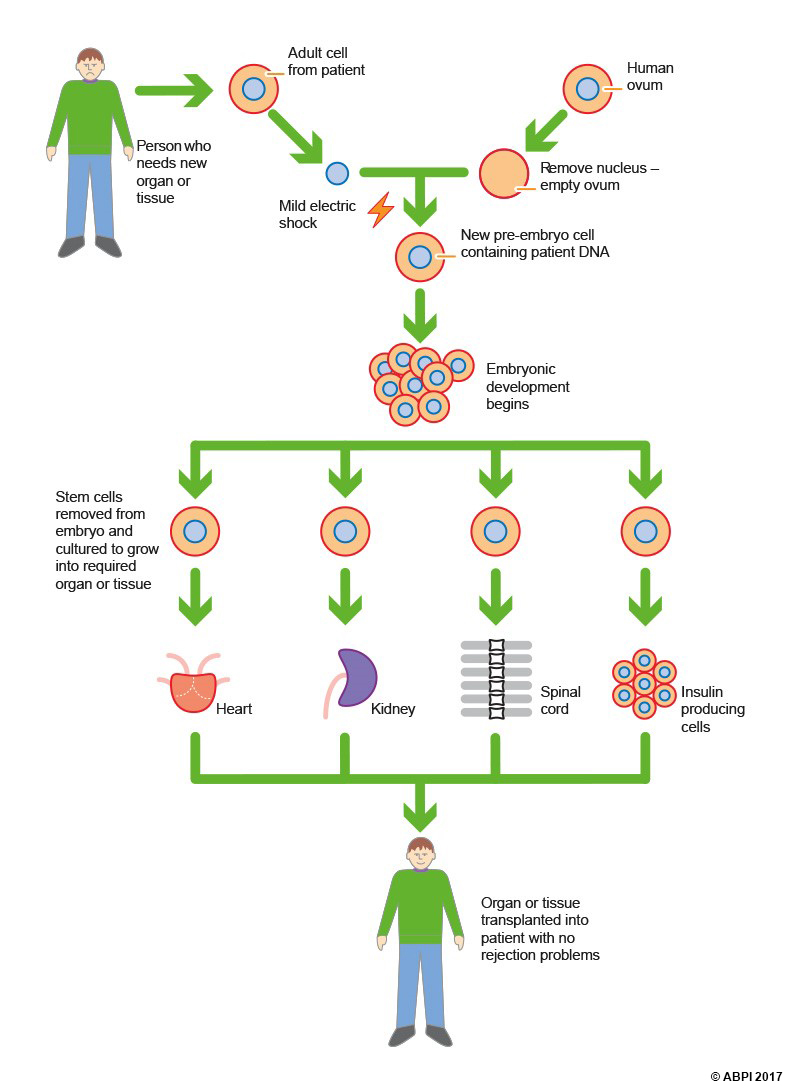 The principles of producing iPSCs and how they may be used to help patients.

This method of generating stem cells is potentially very useful: it creates stem cells which are genetically identical to the person who donated the somatic cell nucleus, meaning that these cells can be transplanted into the donor without initiating an immune response.

However, there are several ethical considerations to consider: the same as those raised as a result of using embryos as a source of stem cells, and those raised by cloning. Some people believe that because both this method of creating stem cells and reproductive cloning start with SCNT, any research which advances therapeutic human stem cell cloning may be used to (illegally) create a cloned human.

There are relatively few donated human eggs available to be used in creating these stem cells, so some research is carried out on hybrid embryos. These are created from the nucleus of a human somatic cell and an animal egg, and are subject to the same regulations as human cloned embryos, as well as animal testing laws. Some people find this kind of research morally wrong because it involves creating an unnatural form of life at a cellular level, and they worry that if research is not properly controlled it could result in the birth of a hybrid animal.

The generation of both human and hybrid stem cells in this way, and any research using them, is subject to the same laws and controlled in the same way as embryonic stem cell research: scientists must hold a licence from the Human Fertilisation and Embryology Authority.