For Chromium, you would expect Cr: [Ar] 3d44s2, however it is actually Cr: [Ar] 3d54s1. However, for Tungsten (two rows below Chromium) we observe W: [Xe] 5d46s2. The following information is likely to be beyond what is required for A-level Chemistry, but it explains the anomalies.

Let’s think about electronic configuration in terms of orbital energies… 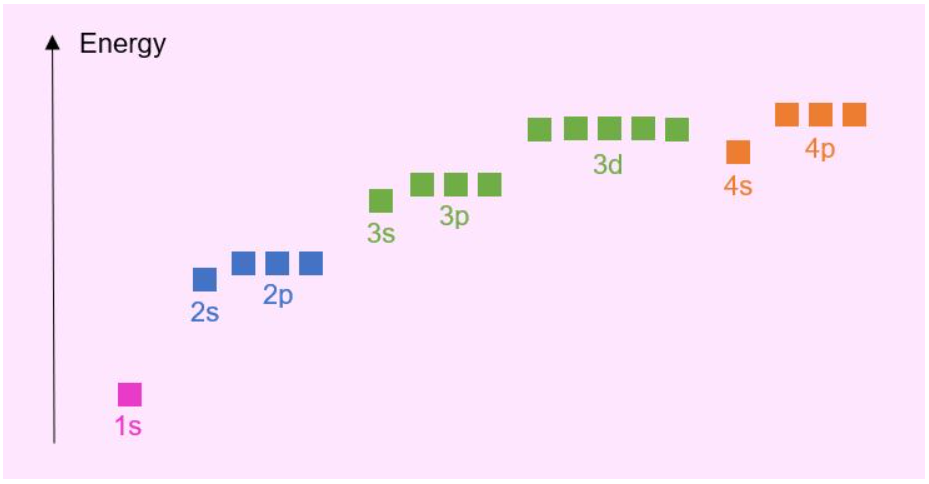 Above is a generic energy level diagram. It should be noted that this diagram is not applicable to every element! Orbital energies are governed by the various attractions and repulsions within the atom. That is, the attraction between protons and electrons and repulsion between electrons. As different elements have different numbers of protons and electrons, these forces vary. The above diagram works well up to Calcium, however when entering the transition metals in the periodic table the orbital energy levels change somewhat…

Once we get to Scandium, the 3d orbitals become lower in energy than 4s orbitals. You might then expect the electronic configuration of Scandium to be Sc: [Ar] 3d3, but it is actually Sc: [Ar] 3d14s2. Why is this? For reasons beyond the scope of A-level, there is a higher probability that an electron will be found closer to the nucleus if it were in a 3d orbital compared to being in a 4s orbital. Remember, we already have electrons in electron shells 1, 2 and 3 occupying this space closer to the nucleus, which would result in 3d orbital electrons causing greater electron electron repulsion compared to the 4s orbital electrons. For Scandium there is a minimal energy difference between the 3d and 4s orbitals, so it is energetically favourable to promote electrons from the 3d orbitals to the 4s orbital to reduce this electron-electron repulsion. This gives the lowest energy and hence most stable electronic configuration. As such, Sc: [Ar] 3d14s2.

Remember, the electronic configuration observed is the one with the lowest energy, making it the most stable. Therefore, d-block elements must determine the most energetically favourable electron configuration considering the reduction in electron-electron repulsion attained from the promotion of electrons from d-orbitals to the higher energy s-orbital. As mentioned earlier, the energies of atomic orbitals vary between the elements. This means that the energy gap between d- and s-orbitals may be bigger or smaller depending on the element. For Chromium and Copper, the pattern observed earlier breaks to give their most energetically favourable electronic configuration.

For d-block ions remember: The s-orbital electrons are lost first. This can be rationalised for reasons earlier discussed.