For almost 50 years scientists have been able to make direct changes to the genomes of a wide range of organisms, from bacteria to people.

Scientists could induce a mutation which self-repaired, remove a section of DNA or insert a section of DNA using tools similar to those shown on page 3. Over time, genome editing has become more refined and more accurate. However, until recently, it was still something of a blunt instrument. The changes were not always as precise as the scientists wanted, and the process could be both relatively slow and quite expensive.

A new technology for gene editing which is more accurate, faster, and cheaper than ever before has now emerged. This is CRISPR-Cas9 genome editing.

CRISPR-Cas9 is a genome editing tool based on a system found in certain bacteria. It is used to cut up and destroy the genetic material of the invading viruses, inserting a small section of the viral DNA into the bacterial DNA so the viruses are recognised and destroyed rapidly if they ever invade again.

The system which has been developed has two main parts. The CRISPR section is the part of the editing suite which recognises specific areas of DNA. Cas9 is a large protein which acts as a nuclease enzyme – it breaks the DNA molecule at specific places. The CRISPR-Cas9 genome editing system was used successfully for the first time on eukaryotic cells in 2013. Feng Zhang and his team at Massachusetts Institute of Technology and Harvard used the system to target specific sites in the DNA of mouse and human cells, cut it and repair it.

CRISPR-Cas9 is now widely recognised as the simplest, most precise, fastest and cheapest method for manipulating genomes – and it has caused a lot of excitement among scientists. The technology is making many new developments in genetic modification possible.

How does CRISPR-Cas9 work?

The CRISPR-Cas9 system consists of the gene-recognising CRISPR region and the Cas9 nuclease. The CRISPR region contains a section of guide RNA which binds to a very specific DNA sequence.

The main steps include:

1. The CRISPR unit containing the guide DNA attaches to the target DNA sequence and the Cas9 nuclease binds in position round the guide DNA.

2. The Cas9 enzyme cuts through both strands of DNA in one or more places, determined by the guide RNA sequences. 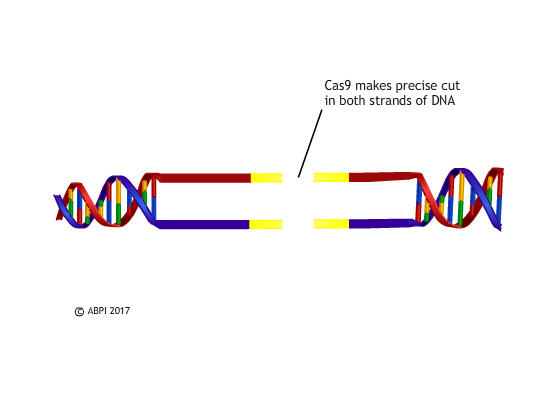 3. Genes may be removed OR new DNA sequences may be introduced as the DNA is repaired. 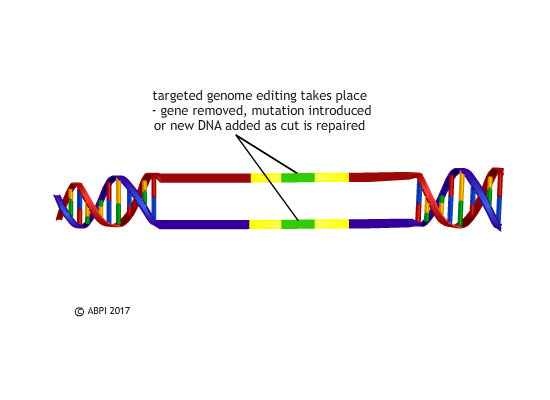