SCID – also known as severe combined immunodeficiency – is a very rare genetic disorder which only affects between 1 in 50,000 and 1 in 100,000 births. Children born with SCID do not have an effective immune system, so they are extremely vulnerable to any form of infection. In many instances, all of the problems result from a single defective gene coding for the enzyme adenosine deaminase. Boys are more often affected than girls because at least one form of the disease is sex-linked (carried on the X chromosome).

In the past, the only way of keeping these children alive was to bring them up in a completely sterile environment, with all their food, water and air sterilised and with no direct contact with other people. Even then, affected children rarely lived into their teens as the slightest contamination could kill them.

Another alternative is a bone marrow transplant if a suitable donor can be found. Although the affected child has no immune system to cause rejection, the transplanted marrow can attack the patient’s cells. What is more, the donor cells may be infected with a virus – and this can kill the recipient very quickly. Patients can also be regularly injected with the enzyme they need, but this involves a lifetime of carefully managed therapy.

Life for children with SCID without treatment is very limited.

So gene therapy, inserting a healthy gene into the DNA using a vector such as a specially modified virus, offers the exciting possibility of a normal life for children who otherwise have a limited life expectancy and relatively poor quality of life.

The first ever attempts at gene therapy were carried out on children with SCID. Different variations of the technique were tried on children in several countries, including Britain. The trials had considerable success – the children treated all developed functioning immune systems which enabled them to fight off infections and to make antibodies when they were given vaccines. They could leave hospital, and their sterile environments, and live normal lives.

Then came the news that, about 3 years after their treatment, first one and then two of the nine children with SCID treated successfully using gene therapy in France developed leukaemia-like symptoms. They responded well to chemotherapy, but both the French and the American governments halted trials of gene therapy for SCID until more was known about why these boys fell ill and whether it was linked to the gene therapy.

The UK government decided differently, feeling that the potential benefits outweighed the possible risks. This view was backed up both by doctors carrying out the therapy at Great Ormond Street Hospital and by the mother of Rhys Evans, the first British boy to be given gene therapy. He received the treatment in 2001, when he was an infant, and he is now a healthy young man, enjoying normal life with a functioning immune system. Great Ormond Street has had many success stories treating this extremely rare condition with gene therapy. They are now considering ways to use the same techniques to tackle other genetic diseases.

Professor Nevin, who chaired the UK committee which made the decision that work should continue commented: "As with all innovative treatments, there will always be the potential for side-effects."

Dr Bobby Gaspar of Great Ormond Street Hospital said: "If we stop these studies now we will be denying extremely effective therapy to children and they may suffer as a result of not receiving this therapy. Ethically we believe it is the right thing to go on."

Marie Evans, the mother of Rhys who has undergone the treatment, also had an opinion.

"If they stop something just because one child has an adverse effect at the end of the day medicine and the world just doesn't go on," she said.

Gene therapy isn’t suitable for all patients, but at Great Ormond Street a number of children have now been successfully treated, without developing leukaemia, and trials into other uses of the technology are underway. 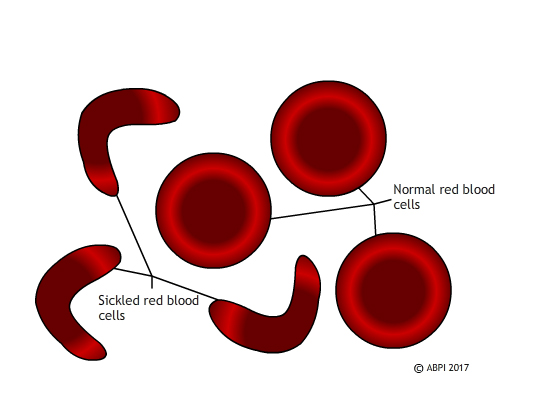 Sickled red blood cells do not carry oxygen effectively and they block small blood vessels. Gene therapy holds out the hope of dealing with both problems in one solution.

Unlike SCID, which is extremely rare, sickle cell disease affects millions of people around the world. In sickle cell disease, a mutation in a single gene affects the formation of one of the two types of protein chain which make up haemoglobin. This changes the shape of the haemoglobin molecule and reduces its ability to carry oxygen. The mutated haemoglobin also makes the red blood cells take on a sickle shape instead of the normal biconcave discs. These sickled red blood cells tend to stick together. They block small blood vessels, causing terrible pain and often tissue damage as well. People who are affected need regular blood transfusions, and often strong painkillers. Bone marrow transplants can treat the disease, but only about 10% of the millions of people affected globally ever find a matching donor. Ultimately - and especially if untreated – sickle cell disease can kill.

In 2017 French scientists announced that they had reversed the progress of sickle cell disease in a teenage boy, by genetic modification of his bone marrow. The boy was very severely affected. By 13 he had had his spleen removed and his hips replaced, and he needed opioid painkillers to deal with the pain. Scientists took bone marrow stem cells, genetically modified them using a viral vector so they could make functioning haemoglobin, and replaced the stem cells in the patient. For 15 months the boy has been making normal haemoglobin, and his red blood cells have functioned perfectly normally. He does not need transfusions or painkillers.

Scientists are always wary of claiming to have found a cure – and this patient is the first to succeed in the clinical trials. It will require many more years of testing – and success in other patients – before the procedure can be declared a complete success but this appears to be a major step forward. Seven other patients have been treated by the French team and they are also showing promising progress.

This is a very exciting development which could potentially help huge numbers of people – for example, 100,000 people are affected by sickle cell disease in the US alone. However, it also raises some ethical questions. The majority of people affected by sickle cell disease live in relatively poor countries, with limited health infrastructure. They do not have the resources to offer gene therapy to everyone – or even a minority – of the people affected. So at the moment, even if gene therapy does provide a cure for sickle cell disease, it will be a cure which is only available to affected people in the richer countries of the world. Perhaps as gene editing becomes more common and more successful it will become easier and cheaper and therefore available globally.

Perhaps we will need to find other ways of treating this and other genetic diseases. Whatever the future holds, we need to consider both the science and the ethics of the treatments we develop.

Duchenne muscular dystrophy (DMD) is the most severe form of muscular dystrophy. It affects about one in every 3500 boys who are born – about 100 boys a year in the UK. It is a sex-linked genetic condition which means the boys cannot make a protein called dystrophin, a protein vitally important for maintaining healthy muscles. Without it the muscles weaken and waste away, being replaced by fat, so that by their early teens most affected boys are confined to a wheelchair and their life expectancy is only to early adulthood. 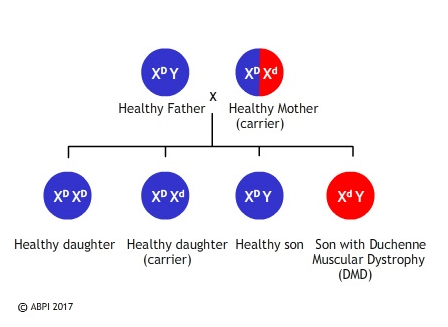 The faulty gene is very large, which makes normal gene therapy techniques difficult. However researchers in the United States and in Britain have found ways of using parts of a healthy gene, called mini-genes, to repair the damaged DNA, enabling the muscles to produce dystrophin and to function in a much more normal way. What is more, the effect has been long term – the protein was still being made a year after the gene was inserted. The only problem is that the gene therapy technique has so far only been tried in mice and golden retrievers, which have a natural mutation similar to muscular dystrophy.

Knockout mice are also useful for studying the impact of different therapies. We have many of our genes in common – of 4000 genes studied in mice and humans, only ten of them are found in one species but not in the other. This, along with the fact that mice reproduce rapidly, have large litters, and are easy and cheap to keep means that knockout mice are incredibly useful in our search to understand gene functions and to find cures for many diseases.

The problem with the mdx mice (a popular model for studying DMD) is that they only display relatively mild symptoms. Several breeds of domestic dog have also been found to have a natural mutation in the dystrophin gene and some work has been done on golden retrievers. Dogs are not ideal laboratory animals for many reasons – they are intelligent and emotive, they are not easy to manipulate genetically, and they take time and effort to breed. However, dogs affected by the canine form of Duchenne muscular dystrophy do have symptoms which are very similar to humans. Now a team at the Royal Veterinary College have discovered a line of King Charles spaniels which appear to have the same mutation in the same gene as humans. A research project began in 2015 looking at the progression of the disease in this breed of dog. This may in future lead to improved therapies for humans and dogs alike. Many of the current trials on possible treatments for DMD still involve the use of medicines to alleviate symptoms, but there have been some promising results recently with genetic modification in both mice and dogs. A few phase 1 human clinical trials are in progress and more are expected soon. Some scientists are attempting to replace small regions of the faulty gene, others are trying to replace the whole thing. Gene therapy has not yet been fully successful in overcoming any genetic diseases, so any patients who take part in early trials of a possible new treatment – and their parents – are very brave. New technologies such as CRISPR-Cas9 hold out hope for new therapies including editing muscle-forming stem cells rather than trying to change the whole organism. There is a long way to go, but muscular dystrophy is another disease where gene therapy may eventually result in a treatment or even a cure.

What are some arguments for and against this?

Transgenic plants – food for the future